APPARENTLY, NOBODY NOTICED THE EARTHQUAKE

CRACKS IN THE EARTH

Currently surrounding the situation in the Gulf are several stories circulating online, about oil venting from cracks in the ocean floor in the area where the broken BOP stack is located, with pressures appearing to fluctuate wildly.There are reasons why this is happening.

Horizon's borehole is actually located in between allochthonous salt bodies and autochthonous salt layers in sub-floor Macondo region. The near-surface sediment is young and unconsolidated muck. Shallow water-flow is a big issue here (that is overpressured unconsolidated sands, sometimes with biogenic gas
( that's produced by sub-floor microbial life ) or just overpressured brine — a very unstable near-surface section. The " Gumbo Zone " the borehole passes through, is the region in which sub-floor microbes
proliferate. Strike-slip movements, which are common in this area, exert pressures on sub-floor hydrocarbon pathways . In conjunction with microbial biogenic hydrocarbon gas productions, this is responsible for fluctuating flow pressures. Were there no heat sources in the sub-floor, the gases would stay where they are due to pressures. However, since heat and pressure are the influencing factors that dictate gas sublimation, this is understandably intertwined with microbial processes. Methane hydrates form and stay at the deep ocean floor levels due to the fact that any heat produced by pyroclastic oil venting, is immediately lost to the surrounding seawater acting as a heat-sink. Deep ocean pressures keep these gases low, where in turn, other microbial strains digest them and produce other products, like a unique form of sulfur, in the form of " mats ". The problem of fluctuations in pressure could have been caused by the force-injection of lower temperature drilling mud, introduced by the " Top Kill " method. Why ?


If bacteria that normally live in high temperature sub-floor zones have their proliferation rates kept in check by temperatures, than lowering the temperature by sub-floor mud-flooding could easily create a temporary environment conducive to the faster division rate of lower temp-loving microbes, which can in turn push the whole reservoir food-chain off-balance. In the mid-1990s, scientists found novel hyperthermophilic microbes in hot oil reservoirs 3 kilometers below the North Sea and the North Slope of Alaska. Oil producers had thought that microorganisms, which “sour” or contaminate oil, were introduced into wells, but, in fact, they are naturally occurring and live on organic compounds in oil. Scientists generally agree that life could exist at temperatures as high as 140° to 145°C (284° to 295°F). Typically sub-floor temperature increases with sediment depth by about 40°C to 50°C per kilometer (about 115°F to 145°F per mile ).Horizon was drilled to a depth of 35,050'.That's 6.6382575 miles. The temperature at the ocean floor is approximately 39 degrees F. So drilling mud, passing through 5k'+ feet of of pipe in cold water, will by any logical conclusion, be at the ambient water temp by the time it passes the horizon of the Mesopelagic region/sub-floor divide.

So what effects could their operations be having ? Nobody knows for sure, but one thing I know for sure and that's that BP won't release current pertinent sub-floor geo-data to the public.

Below are some graphics depicting the food chain cycle of oliphilic microbial life in the deep-ocean subfloor. 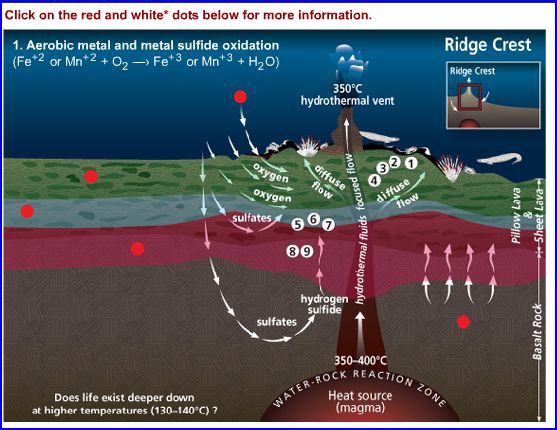 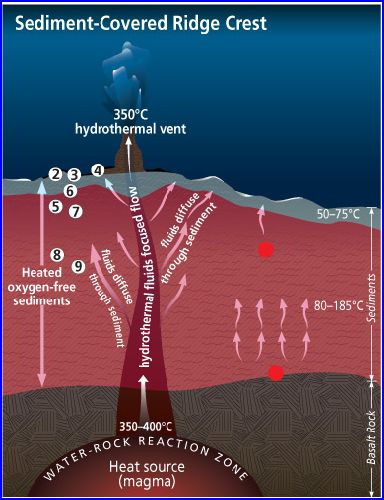 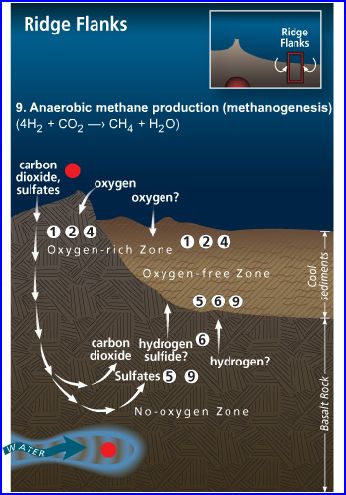 Since one of the primary ingredients for COREXIT is 2-Butoxyethanol, of which BP has been pumping generous quantities into the surrounding areas, and pressures at this depth keep gases suspended in the water for greater lengths of time, this means that the C02 and Carbon Monoxide created from the environmental degradation of COREXIT could actually kill any microbial life in the area. After all, 2-B is an all purpose adjuvient ingredient/herbicide/fungicide/insecticide/microbicide/ , I am assuming that's why we are not seeing any images from the area that look like the ones below. 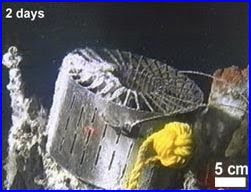 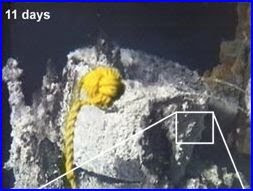 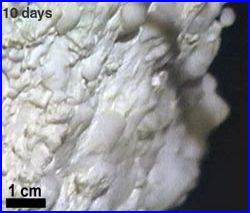