Pressure testing...? Seriously, how can shutting the well in determine where any leaks are ?
Why blur the lines with changing definitions..? .pressure testing, integrity testing, same difference. 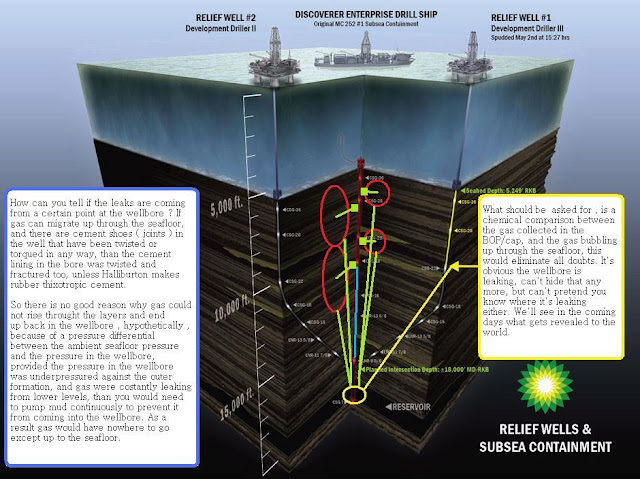 One of my main curiosities over the past 3 months was how produced sand would figure into this scenario.
Now we get reports of possible collapses downhole....duh.....didn't see that coming, how could you possibly think that over 3 months, that some sort of subsidence would not happen ? 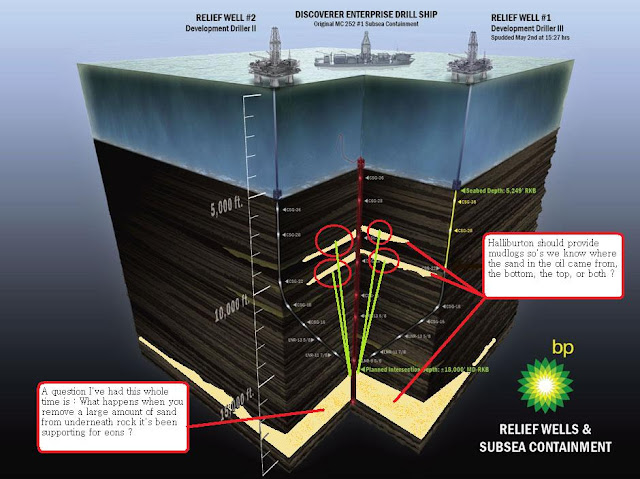 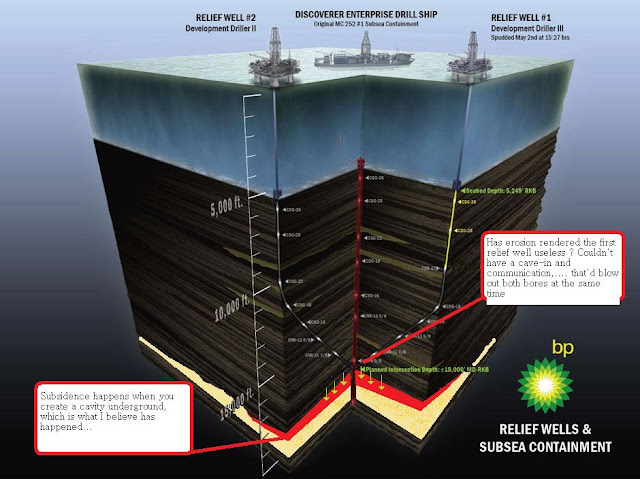 Many time I have been watching the feeds of the ROV cams, only to see so many different lighting types, but also different colors, I'm sure you have too....

I have my theory about the different colors, I thinks it's basically caused by sonar. I'll explain with a few simple excerpts from Wikipedia.


Raman scattering or the Raman effect

In 1922, Indian physicist C. V. Raman published his work on the "Molecular Diffraction of Light," the first of a series of investigations with his collaborators which ultimately led to his discovery (on 28 February 1928) of the radiation effect which bears his name. The Raman effect was first reported by C. V. Raman and K. S. Krishnan, and independently by Grigory Landsberg and Leonid Mandelstam, in 1928. Raman received the Nobel Prize in 1930 for his work on the scattering of light.

When light is scattered from an atom or molecule, most photons are elastically scattered (Rayleigh scattering), such that the scattered photons have the same energy (frequency) and wavelength as the incident photons. However, a small fraction of the scattered light (approximately 1 in 10 million photons) is scattered by an excitation, with the scattered photons having a frequency different from, and usually lower than, the frequency of the incident photons. In a gas, Raman scattering can occur with a change in vibrational, rotational or electronic energy of a molecule . Chemists are concerned primarily with the vibrational Raman effect.

The Raman effect differs from the process of fluorescence. For the latter, the incident light is completely absorbed and the system is transferred to an excited state from which it can go to various lower states only after a certain resonance lifetime. The result of both processes is essentially the same: A photon with the frequency different from that of the incident photon is produced and the molecule is brought to a higher or lower energy level.

But the major difference is that the Raman effect can take place for any frequency of the incident light.


Here's some various minerals under the effect, beautiful... 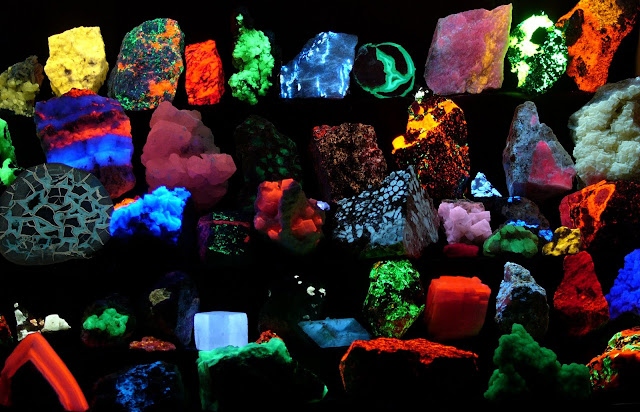 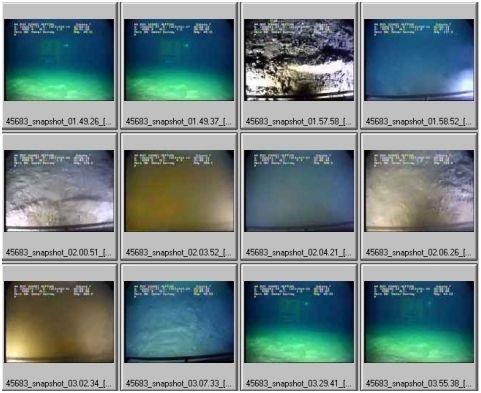 So lets say that a certain wavelength of sonar was being used in front of an ROV,. The ROV is using the sonar, and at the same time, lighting the area and filming simultaneously. There are many things suspended in the water around the well, everything from heavy ppms of various minerals, to COREXIT ( there is an autonomous dispersant system in use on the seafloor, it's in the official BP press release documents. ) to dispersed oil, etc etc, I'll skip a long-winded list, I'm sure you get the idea. . So....sonar.....suspended particulates, ultrasonically attenuated light and fluorescing minerals and compounds....seems fairly simple to me.


The frequency of light scattered from a molecule may be changed based on the structural characteristics of the molecular bonds. Attenuation of light is important in physical oceanography. Here, attenuation is the decrease in light intensity with depth due to absorption by water molecules and scattering by suspended particulates. This same effect is an important consideration in weather radar as rain drops absorb a part of the emitted beam that is more or less significant depending on the wavelength used.

After Deepwater Horizon sinking, with the riser still attached.....I have my doubts that the shallow cement shoes are sturdy , I have a real hard time believing that there is oil & gas not leaking up the annulus, from the reservoir or higher areas around the wellbore ( They are called" lenticulars " or lenses of sand and are found laterally to the side of the bore in surrounding formations of shale ) and finding un-seated joints in the wellbore and migrating laterally out through the mudline, I have an even harder time believing that there was no damage to the outer layer of cement lining the wellbore when DWH sank.

We all know that they had to use cables and winches to straighten out the flex joint on top of the  BOP stack, before they added the 3-ram capping stack.

Because it was bent,..... and if it was bent, than that means that the force applied when the sinking platform torqued not just the flex-joint , but the other parts of the system below it, all of which are joined with technical precision in a series of hubs, locks and seals which allow various parts of the system to fit together, and fit together well enough to contain high volume flows of crude oil and gas.


Looking at the following diagram, I still have my doubts these connections are 100% structurally integral. 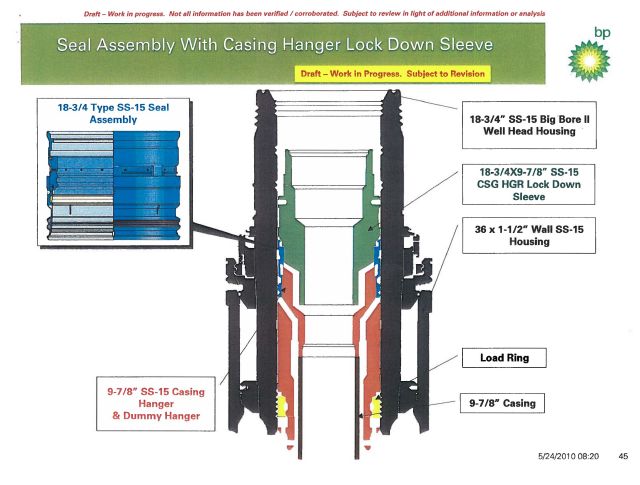 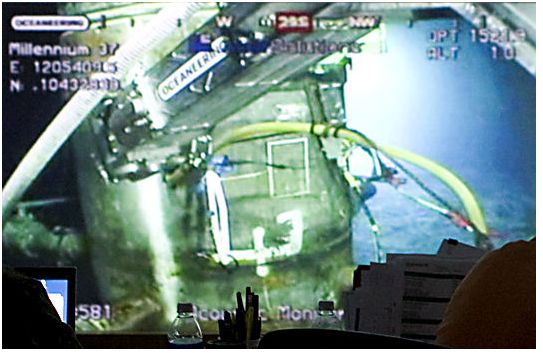 .......then there's that ugly fact they cemented (read "trapped" )  fluid into a supposedly sealed space, ie" the annulus ", so there's a fluid of unknown compressability in a space whose integrity is unknown also....great.

.....for weeks now, I have wondered where this trapped fluid was supposed to go...?

. ....if the cement at the bottom was completely blocking flow ( communication ) with the reservoir and thereby blocking any fluids from coming up the annulus, why are they looking for seeps ?

...and... BTW, try to find any info on high volume/large biogenic seeps like Ken Wells says was the source of the gas around the wellhead....you won't find biogenic methane being produced in large enough quantities to vent from the seafloor,....it gets frozen into hydrates long before it leaks out of the mud and rock.

..Then it can get warmed and will dissociate in large enough amounts to be noticeable as a seep, if  fluids erode their way into the area they have formed in.

......if what Mr.Wells were saying was true, those particular " miracle " microbes would be put to use already in the petroleum industry making natural gas....

....Only thermogenic gas can migrate fast enough to establish pathways in the strata, only thermogenic is produced in those high quantities. Yes, there are biological traces of microbial gas ( methogenic, biogenic ) in most thermogenic gas, but are they are a small fraction considering the main source they are found with.

...if the wellbore isn't damaged, the annulus shouldn't be leaking into the surrounding geology and finding it's way up though the mud.

...if it is damaged....how do you guarantee that any fluids/cement you pump into it won't just get pushed right up and out... ?

......if the cement job is allowing fluids to leak up the annulus from the reservoir, then how will it provide enough resistance for the incoming mud to push the heavier fluid up through the annulus, instead of blowing the plug out backwards into the reservoir ?

......But,... enough with off-the-cuff engineering, seriously,.. what's next ...?..the flux capacitor and the inverted-vortex 9 ram gate-valve-piston shear capping-riser ?